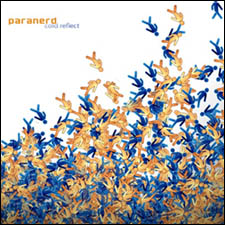 Hailing from Canada, Paranerd's songs individually reveal themselves like being lost in specific thought. Continuously reflective themes rather than catchy clips with the occasional exclamation point. Unraveling the most vulernable moments. While many electronic musicians utilize repetition and hooks, he has an introverted and personal approach to writing that puts in you a position of wondering where the layers of melody or mood will go next.

As so many favorite albums are created for so many of us, "cold reflect" is the kind of music that someone can identify with. A fitting title for such an emphatic release... And while his style may not be exclusive, his sound is intriguing, personal, and recognizable.

Reviewer: fruktos - favoritefavoritefavoritefavoritefavorite - October 16, 2004
Subject: caught in a tumble
a soulful and cold felt album, perhaps having something to do with the season and canada , but maybe not. too many reviewers in magazines and on the internet draw on a musician's location for comparison. could be right, could be wrong.. fact is there's too many types of these comparisons, but i digress. this is a great listen. songs like 'slumber lovers' will have you thinking of many (unnamed) idm acts from the past and present. As the comments say on One's splash page this is "undeniably paranerd"... very playful, content, mindful, and well produced songs.

As for the playfulness it reminds me in a way of the music that comes from the likes of AM Boy, Casino vs. Japan, Yellow Jellow., etc. but the style itself is more like.. I dunno, something more upbeat off m3rck or warp. I think this is the first time in a long time I've heard this kind of energy transfer over to this kind of sound. very idm, sometimes downtempo, sometimes chiptune.

I've listened to the previous releases by Paranerd after downloading this and his progression seems obvious. He seems to have had a penchant for synths that normally belong to the chiptune world. On the other album at One, "Little Shames", this is more obvious but the melodic structure is still what I have now come to expect. This is where his progression and evolution shows. It's always an enjoyment to be able to follow an artist's progression and Cold Reflect to me seems like the idea progression I would have thought of for this artist after hearing his older works.

The only thing production wise I noticed was that one of the songs i like the most, slumber lovers, is a little quieter than the rest of the recordings. Easily fixed with the turn of a knob.